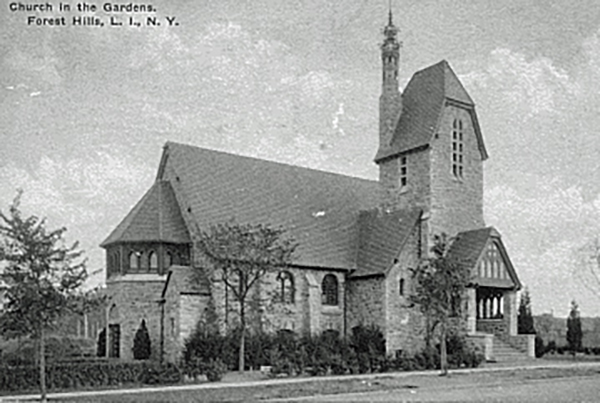 “I hope its doors will always be open to everyone who loves the Lord Jesus Christ and wishes to do His will.”

So wrote Mrs. Russell Sage in a letter to the Church-in-the-Gardens’ first pastor, Dr. Robert J. Kent, in 1913, and so it has been for over 100 years. On March 19th, 1913, the church was formally organized with 38 members from a number of denominations.

The constitution, which was unanimously adopted, had been prepared by a committee of five, each of whom was from a different denomination. It provides that those who do not want to sever their relation to other churches and yet wish to identify themselves with this community church may join as affiliated members. The membership has since grown to hundreds of members and continues to welcome a diverse group of followers from a variety of religious backgrounds.
Through the kindness and generosity of the Sage Foundation, the first service was held in a store at the corner of Dartmouth St. and Continental Ave., which is now the Gallery office of Terrace Sotheby’s Realty. The church was then called the Union Church of Forest Hills Gardens.
By November of 1913, the very first service, in the present-day Church-in-the-Gardens location, was held in a wooden portable chapel on Nov. 9th.
A year later, on November 8th, 1914, the corner stone was laid on the corner of Ascan and Greenway North. The Forest Hills Gardens Bulletin printed the day before read, “The beautiful gift of Mrs. Sage has been made on the condition that the Church in the Gardens keep its doors wide open to all who wish to unite in worship, fellowship and service.” The edifice, designed by architects Grosvenor Atterbury and John Almy Tompkins in Norman style, was built from native field stones that were handpicked by Mr. Atterbury. Its massive arches were hewn from cypress. The pulpit and lecturn, crafted from wooden panels carved 200 years before in medieval Brittany, were the gift of Mr. and Mrs. Robert DeForrest. The cross was the gift of Henry and Lillian Hof.
Mrs. Sage had written, “I wish I could be personally present when the corner stone of the Church in the Gardens is laid. I hope its doors will always be open to everyone who love the Lord Jesus Christ and wishes to do His will. Denominational lines mean nothing to me. Faith is our Lord and the motive of His life of service to all mankind is all we need to unite us.”

That same year saw the opening of P.S. 101 in a portable schoolhouse on Russell Place and the first playing of the Davis Cup Championships at the West Side Tennis Club.
In 1926, The Community House was built. Robert Hof shared with us, “The Community House was owned by the Church in-the-Gardens, but dedicated to the wider world to be used for socially redeeming purposes.” As it still is to this day by offering, just to name a few, the following activities and services, including counseling center, local farm produce co-op, youth choir, collections for Jamaica Food Pantry, Pre-K, sandwich making for the homeless, home of the Women’s Club of Forest Hills, Sunday School, Bible Study, Book Club, Men’s Club of Forest Hills events, Blood Drives and so much more.
In 1952 a parish house was built on the site of what were tennis courts and playground. At that time services were being broadcasted on network television here in New York City.
In 2014 on the occasion of its 100th anniversary, the Church-in-the-Gardens was placed on the National Register of historic places by the United States Department of the Interior in recognition of its architectural and historic significance in the cultural life of New York City.

Breaking Ground for the Church-In-The-Gardens