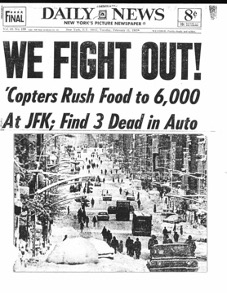 The recent snowstorm inspired us to think of past snowstorms and how they affected our community.  Perhaps the most impacting one was on February 10, 1969, the storm that killed 21 people in Queens and forever stained the legacy of then-Mayor John Lindsay as well as crystalizing the concept of snow removal as a political act.  The storm was almost a complete surprise, as the weather services did not anticipate the heavy snowfall that this extratropical cyclone N’or Easter brought.

The impact to Queens, eastern Queens in particular, was enormous.  Although it was “only” 15-20 inches, the city left eastern Queens unplowed for a week; seemingly in favor of Manhattan.    As result, more that 6,000 people were stranded at JFK airport for days, with helicopters flying in food and flying stranded passengers to Manhattan.  Passengers slept in parked planes and were entertained in the terminal by stranded entertainers Soupy Sales and Goldie Hawn.  3 people were found dead in their car on in airport parking lot, killed by carbon monoxide poisoning.  Queens hospitals were undermanned because employees couldn’t get to work through the snow-covered streets, forcing helicopter flights to Manhattan for basic surgeries.  Dr. Ralph J. Bunche, a former Undersecretary General at the UN, telegraphed Mayor Lindsay from Kew Gardens to complain about the “neglect” in Queens and called the city’s performance “shameful”.

As a goodwill gesture, Mayor Lindsay did travel to by limousine Queens several days after the snowstorm, getting stuck in the snow on his way to Rego Park with a caravan of press following him.  He struggled to get around even after switching to a 4 wheel drive.  He eventually was booed in Kew Gardens Hills and Fresh Meadows, were he was called a “bum”.   Over 200 people flung catcalls at him after he stopped to call City Hall from a pharmacy on Horace Harding Boulevard.

After his trip, the Mayor ordered “all available manpower and apparatus” sent to the borough for snow removal and the borough was finally released from the snow’s grip in a few days.

With all of the problems it caused, the storm exposed the inadequate plans, communication strategy and equipment the city had for snow removal.  Improvements were made in subsequent years.  Now, you can actually track the snowplows on the city’s website as the plows have GPS trackers.

Conditions in The Gardens probably weren’t much better.  One of our Board members remembers very high snowdrifts to walk through in Station Square.  In any case, storms of that proportion require significant prework and planning and the snowfall level was a surprise.

There was another surprise snowstorm in 1978 that gripped the entire city again; only 3” of snow was projected and 17” fell.   The Gardens crew apparently fell behind, not knowing the  massive snowfall was coming.  The equipment that The Gardens had at the time was unable to clear the streets once it had gotten so deep and heavy.  James J. Reilly, then the President of the FHGC worked with Mayor Beam to get help.  The Gardens streets were cleared by snowplows on loan from JFK Airport, which must have been sight to behold!

These days, snow mostly means all the neighborhood children descending on Olivia (Deepdene) Park for sledding.  That we can deal with.

And if any of you long-term residents where around for the 1969 or 1978 storms, we would like to hear about it at foresthillsgardensfoundation@gmail.com.