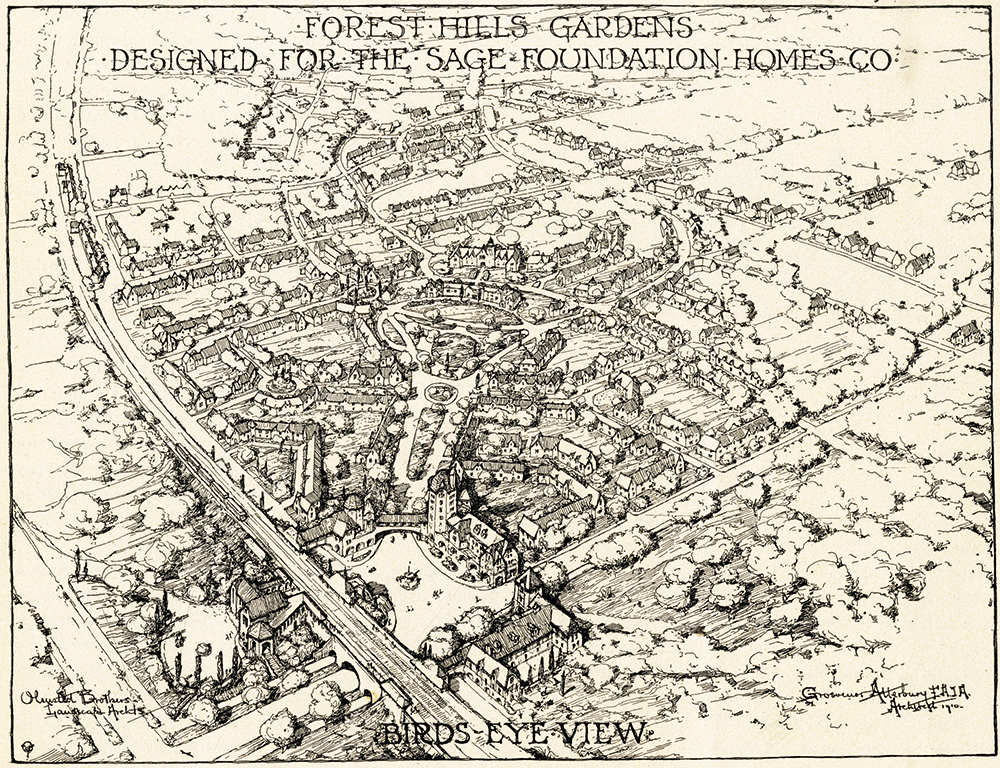 Frederick Law Olmsted: Designing America, was the film the Forest Hills Gardens Foundation chose to feature in last month’s successful annual fundraiser which featured guest speaker Laurence F. Cotton.
If you were fortunate enough to catch the beautiful film documentary, we all now know that Frederick Law Olmsted Sr. was the fore-father of the profession of landscape architecture in the U.S.

Young Olmsted graduated from Harvard in 1894. He then spent over a year in Asheville, North Carolina on the site of George Vanderbilt’s 100,000 acre estate which would become the Biltmore. A year later he entered the Olmsted firm and became partner with his half-brother, John Charles Olmsted, in the family business.
The development of Forest Park in Forest Hills, began in 1896 and hired the firm of Olmsted.

Forest Hills Gardens was then conceived in 1909. It was an experiment in applying the new “science” of city planning to an undeveloped suburban site. This 142-acre enclave was the collaborative creation of Olmsted Jr. and architect Grosvenor Atterbury.

Forest Hills Gardens was sponsored by the newly established Sage Foundation for Social Betterment with the intent of creating a model suburb for America along the lines of the “garden cities” taking shape in England and Europe. Olmsted recognized the importance of having a single vision, a comprehensive master plan that would lead to a unified design of buildings, streets, and landscape.

The Olmsted firm was engaged to work on the plan, gently curving streets and landscaped parks, which provided an idyllic setting for the suburb’s architecture.

Their inspiration from the past is evident everywhere, in the grand avenues that branch out from Station Square. The main roadways were designed, he said, “for direct, ample, and convenient transportation,” while the narrower local streets carved out “quiet, self-contained and garden-like neighborhoods.”
The layout of the streets connected Forest Hills Gardens to the surrounding grid, but with landscaping curvilinear forms, the streets conveyed that this place was essentially different. If you look at an aerial map of Queens today, it is clear that Forest Hills Gardens pops out from the city grid with its curved streets and parkways, its landscaping and sea of red roofs.

Olmsted and Atterbury created a harmonious assemblage of landscape, architecture, and tree-lined streets unlike anything before seen in the United States.

After his brother’s death in 1920, Olmsted became the senior partner in the firm which was the largest office of landscape architecture in the world.

Olmsted remained a partner in the Olmsted firm until his official retirement in 1949, eight years before his death on December 25, 1957 in Malibu, California.