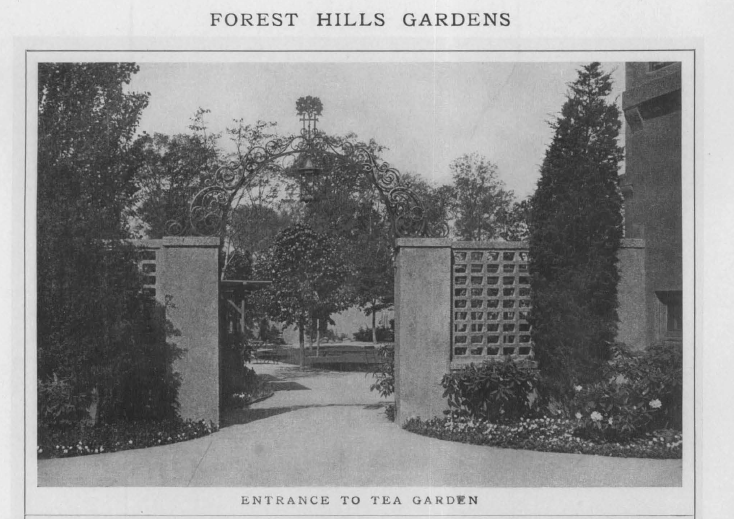 Story as it appeared in the Queens Ledger

The Tea Garden may not be familiar to the current generation, but the charming spot nestled behind the Forest Hills Inn and Jade Eatery & Lounge at 1 Station Square will make a comeback as early as later this year.

Passersby last week witnessed the filming of Fidelio, a film about the life of director Stanley Kubrick. The abandoned Tudor-style garden was resurrected as a scene from 1957 Munich. The Kubrick film, Paths of Glory, was filmed in Bavaria, which is where Kubrick met the love of his life, Christiane Harlan.

Between the Tea Garden’s century-old trees and in front of a sign that read “Hofbrauhaus Munchen,” couples socialized, toasted, and danced the waltz. Nineteen year-old actor and songwriter, Elijah Vance played a German actor in the carnival, and stated,

Prior to filming, the Tea Garden was weeded, and cracked and missing flagstone tiles were replaced. Red-and-yellow potted Mums graced the perimeter of the defunct brick fountain, which was embellished with a multi-level traditional stone fountain.

Tree pits were also outlined with flowers and mulch. Blue-and-white balloons and wooden barrels contributed to the scene’s authenticity.

Local residents got a taste of the Forest Hills space that once hosted festive gatherings prior to the 1960s, and began to recognize the Tea Garden’s potential for a creative reuse project.

William Coleman retires as President of the Forest Hills Gardens Foundation
A Look Back at the Teagarden in The Inn, article by Michael Perlman