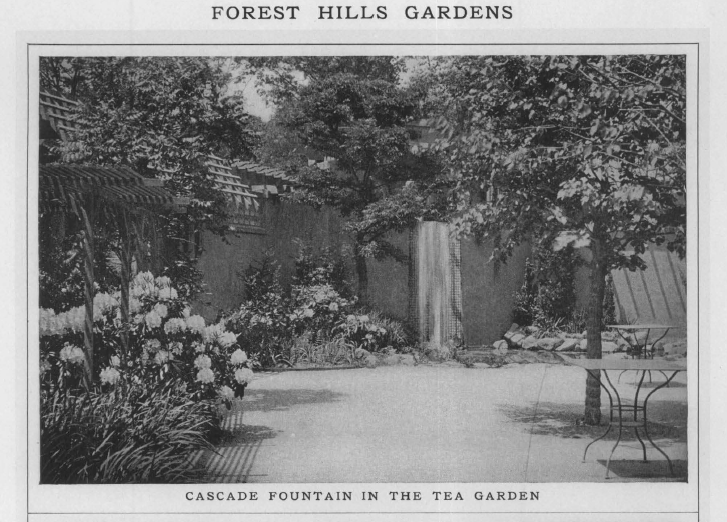 The back of the century-old Forest Hills Inn at 1 Station Square is home to a long-lost treasure known as the Tea Garden, of which the majority of Forest Hills is unaware.

Situated on Greenway South behind an ornate gate, a fantasy-like enclave would open in 1912 to the delight of Inn guests and residents. In 1909, Station Square was the center of social life in a planned garden community, with Grosvenor Atterbury as the Gardens’ principal architect, and Frederick Law Olmsted, Jr. as the landscape architect for public spaces and parks.

The Forest Hills Inn’s Tea Garden played host to numerous weddings, performances, and dinner dances, in addition to afternoon tea. Today, it is a shell of its former glory, and is prone to controversy between residents who wish to see it revitalized for social functions versus those who prefer restoring it as a private garden.

The Tea Garden borders the Forest Hills Inn and 20 Continental Ave, both of which are co-ops.

Nature has caused the monumental trees to flourish, but nature also cast a toll on the garden’s decorative features. The cascading fountain and pool has vanished. The “Ring For Tea” stand and rocking chairs, which were replaced with tables and umbrellas, have also vanished.

The central brick fountain is non-operational, the flagstone tiles are faded and cracked, and a gazebo bears rust. Upon first glance is a sad reality, but then the magic of what was and what could be resurrected becomes evident.

It is difficult to grasp how an integral feature could fall into abandonment and disarray, but not entirely surprising. In 1967, the Forest Hills Inn became apartments, which went co-op in the 1980s.

In 1977, it was announced that the U.S. Open would move from the nearby Forest Hills Tennis Stadium to Flushing Meadows Park. And music festivals in Forest Hills reached their peak in the 1960s.

With the change of occupancy of the Forest Hills Inn, and fewer tennis and music celebrities visiting Forest Hills, the Tea Garden was forgotten.