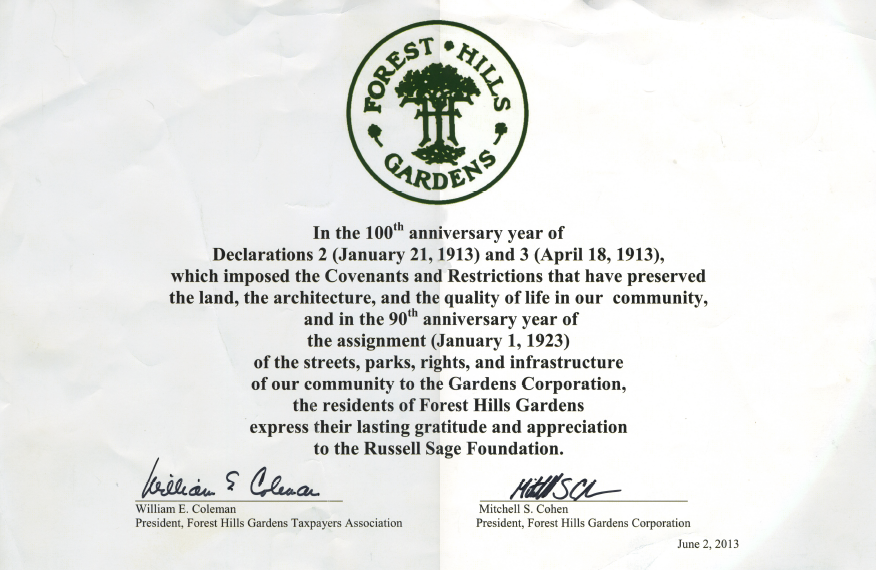 Story as it appeared in the Queens Ledger:

http://www.queensledger.com/view/full_story/22876221/article-FH-Gardens-a-mark-of-the-covenants-Story as it appeared in the Queens Ledger

Nestled behind a trestle on Continental Avenue, steps away from the Austin Street business district, is the country’s earliest planned garden community.

When entering the 175-acre Forest Hills Gardens, one may think they are in an old English suburb. At Station Square and the towering Forest Hills Inn, four sectioned archways lead to winding streets and private parks. There are greater than 800 stately homes, 11 regal apartment houses, churches, and the West Side Tennis Club.

On June 2, the Forest Hills Gardens Taxpayers Association hosted “A Thanksgiving To The Russell Sage Foundation” and “A Celebration To Our Founding Documents” at The Community House. Nearly 100 residents participated in a ceremony marking the 100th anniversary of the covenants and restrictions that has preserved Forest Hills Gardens since 1913.

Read more: Queens Ledger – FH Gardens a mark of the covenants Story as it appeared in the Queens Ledger
Published 07/26/2017