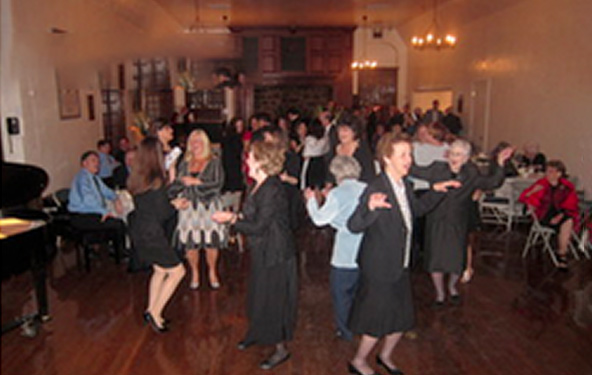 Here’s to the first 100 years of the Women’s Club of Forest Hills!

Club members and guests commemorated the occasion with an elegant evening gala at the Church-In-The Gardens Community House on October 19. This followed the club’s centennial luncheon and cocktail reception on October 8, which was exclusively for members.

A dinner buffet and hors d’oeuvres were served as a stone fireplace kept the room warm. The Morrie Louden Group performed big-band standards as guests danced.

Founded in October 1913, the Women’s Club of Forest Hills feels like a second home to nearly 300 women from Forest Hills and nearby neighborhoods. The club originally met in members’ homes and at the Forest Hills Inn, prior to the Community House’s opening in August 1926.

The club has 16 chapters, which range from the Drama/Singers Chapter to Community Affairs to Mom’s Time Out to the Garden Chapter. To factor in social media and expanding demographics, recently installed chapters are the Digital Chapter and International Interests.

Members take pride in their bonds among one another and the community through philanthropic, social, intellectual, and artistic initiatives. Members coordinate meetings, lectures, trips, luncheons, holiday celebrations, musicals, and fundraisers. The annual Philanthropic Luncheon raises funds for organizations such as City Harvest, Friends of Station Square, Queens Zoo, and Girl Scout Council of Greater New York.

Looking ahead, members can anticipate a Christmas show on December 9.

Middle Village resident Joan Barnes, owner of London Lennie’s in Rego Park, has been a member for nearly 10 years.

“It is wonderful that our club has managed to survive for 100 years despite economic recessions,” said Barnes. “This club shows us how women enjoy getting together and doing great things for the community.”

Congresswoman Grace Meng was a special guest at the gala.

“I am very excited to celebrate 100 years of women’s contributions to Queens and our country,” she said. “I stand on the shoulders of many women who come before me, and I hope to pave a better way for younger women who come after me.”

“This is a very welcoming club,” said Ethel Romano of Forest Hills. “We do things the way they were done during an earlier time, which this generation is not accustomed to. For example, everyone brings homemade food to our events.”

“This is a superb place to meet with friends,” said Kogan, who in May of 2012 celebrated her 90th birthday with approximately 200 women.

“We are a really loving and giving group of people, and my friends have become like family,” said Anna Pinto, a member for over 10 years.

“It is a rarity in New York to have this kind of community setup that’s close-knit with strong community interests,” said Gmerek.

Reflecting upon the centennial, President Helen Griffin attributes the club’s success to “a range of women of all ages who bridge the generations.”

As for the next 100 years, Christine Evangelista, Chair of the Drama/Singers Chapter said, “We should keep doing the same things we are doing, since we do a very good job.”